Chili and Cornbread...comfort food for a bad day 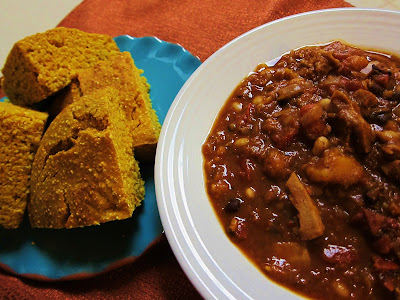 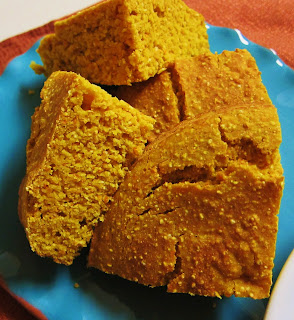 Wednesday I was having one of those terrible, horrible, no good, very bad days. Work was hectic to begin with, and I was feeling stressed. I spent a significant amount of time making a large batch of soup, and I walked away for too long and it burned.  This wasn't one of those times where I could just not disturb the bottom burt part and the rest would be fine...no, I knew it was bad when I walked into the kitchen and took a whiff of the horrible burnt smell that was permeating it.  I tasted some, and had a coworker do the same for a second opinion, and we both agreed that it was awful...the burnt flavor had tainted the delicate curried soup that had previously smelled so wonderful.  The worst part was that it had to be thrown out, which was quite a process...making a mess and stinking up the deli.  You can't just throw it away either, since it is a liquid it has to be strained and is still quite heavy.  By the time I got home that day I was just exhausted, feeling really rotten about the soup, and needed a pick me up.  No, I didn't go for a large glass of wine, I decided that if soup was my downfall, soup would be my comfort!  So I got to work preparing a batch of chili and some cornbread to go with it!  This wasn't going to be regular chili, I used my regular chili base, but added some roasted buttercup squash that I had on hand, since nothing makes me feel better than squash!  I used black and white beans, since I didn't have enough of either to make a full batch and what the heck, I wasn't going for glamour here, just comfort!  I always add a few unusual ingredients to my chili that make it unique, and those things are cocoa powder, worchestershire sauce, and peanut butter.  They may sound wierd, but they give it that "it is really good, but I can't quite put my finger on it" detail that I love!  I can't have chili without cornbread, so I had to make some to go with this one!  I decided to incorporate the squash into the cornbread as well to keep it moist and do something a little different than normal.  Tis the season for squash and pumpkin afterall!  I wasn't sure how the cornbread would turn out, because it was a new recipe that I made up.  But it was delicious and tender, most likely due to the squash and coconut oil.  It was a perfect partner for the chili, and the recipe was definately a keeper.  This meal ended up being just what I needed after the not so fun day I had just gotten home from.  I will be making this again soon, hopefully this time on a good day!  Here are the recipes if you are interested! 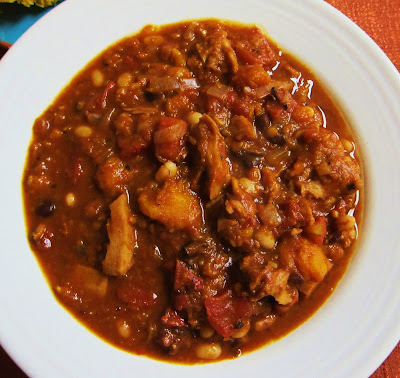 vegan sour cream
In a large stockpot or dutch oven, heat the peanut oil over medium heat.  Add the onions, and saute until softened, about 6-7 minutes.  Add the garlic, chili powder, cumin, cinnamon, oregano, chipotle powder, and cook for a minute until fragrant, then add the tomatoes, cider vinegar, cocoa powder, agave nectar, worchestershire sauce, tamari, peanut butter, veggie broth, and bring to a boil.  Simmer until flavors have blended, stirring often, about 20 minutes.  Add cooked beans, squash, and sea salt and pepper to taste, and continue to cook until heated through.  Serve hot with vegan sour cream and cornbread.
* Preheat oven to 475 degrees.  Line a baking sheet with foil, and spray with non-stick spray.  Cut 1 large buttercup squash in half from top to bottom, and remove seeds.  Place cut side down on baking sheet, and roast for about 25-30 minutes until tender.  Remove from oven and let cool until cool enough to handle, then remove skin and cut into cubes. 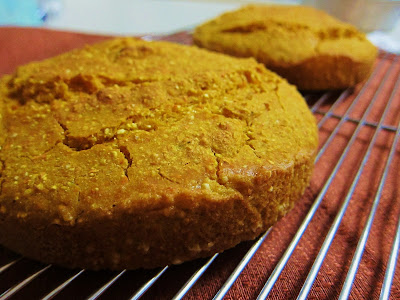 2 Tbsp coconut oil
1 Tbsp agave nectar
1 Tbsp cider vinegar
Preheat the oven to 375 degrees.  Line a 9 inch round pan (0r 2 6 inch round pans) with parchment on the bottom and spray with non-stick spray.  In a large bowl, whisk together cornmeal, flour, baking soda, baking powder, sea salt.  Whisk in coconut milk, squash, coconut oil, and agave nectar until well combined.  Whisk in cider vinegar quickly until just combined, then pour into prepared pan(s).  Bake for 15-20 minutes until lightly golden on top and a toothpick inserted into the center comes out clean.  Cool a few minutes before turning out from pans.
Posted by Amy at 3:09 PM

Awe, sorry about your soup and day, Amy. I've had quite few like that;) OOh, and nothing erks me like wasting food-that's no fun. It happens though...
Anyway, this looks delicious, and I'm trying your cornbread!

Green Girl @ A little bit of everything said...

I guess is something in the air, I hardly had time to breath last couple of days, good thing tomorrow is Saturday, yeeee
Squash cornbread sounds delicious, I have a butternut in the pantry, I'll give it a try

Oh my dearwoman...I understand how those days go. I've had many loaves of bread burn or fail to rise, and it can be so discouraging! But like you, I find that getting back into the kitchen is what cures my ills. This soup looks delicious, and I'm excited to give it a try. Thank you for sharing...here's to a beautiful weekend! You deserve it.