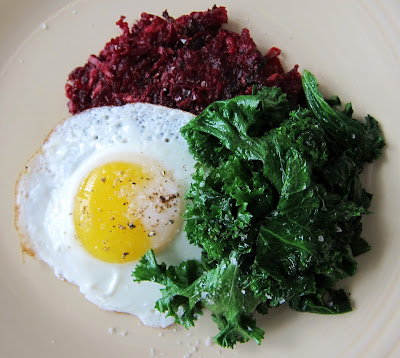 Minnesota woke up to a blanket of white powdered sugar frosting outside today...as it decided to dump snow after being nice and finally up to 50 degrees last week.  Kind of an evil tease on the weather's part if you ask me!  I was a bit bummed about it being cold and all, wanting to run outside today, but opting for the treadmill instead since they did a horrible job of plowing around my neighborhood.  Just looking at the snow makes me feel chilly!  The deli where I work sold gallons of soup and tons of hot food today to the brave souls that felt like venturing out.  I needed some warmth as well and maybe that is why I thought a bit of warming breakfast for dinner tonight might be just the thing!  I was sittting on my lunchbreak trying to figure out what I could make from the ingredients I had at home.  Not something sweet like pancakes, which I always have the makings for.  Something savory and a little salty like hash browns sounded perfect!  But there was one problem.  I didn't have any potatoes.  I did however have celeriac and beets! 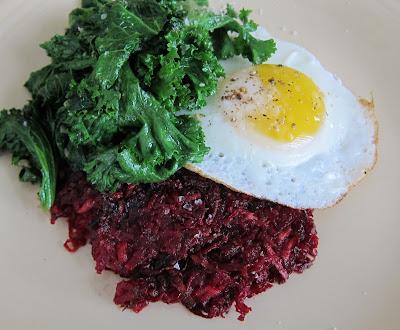 A beet and celeriac hash, how beautiful would that be with the bright red color?!  So that is what I made.  I topped it off with a fried egg, and some garlicy mustard greens, which are my favorite green right now, so I had bought a bunch of them last weekend.  It was beautiful, with the red and green, but most importantly it was delicious!  Salty hash browns crisped at the edges full of veggie goodness and spicy mustard greens with the richness of the egg...yummy!  Made me forget about the icky snow for a bit!  If you think potatoes are the only way to go with hashed browns you should try some other veggies, you just might like them!  Here is the recipe if you would like to try mine! 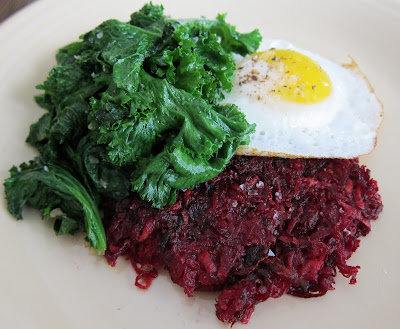 In a bowl, mix together the shallot, beet, and celeriac along with pepper.  Preheat oven to 250 degrees.   In a medium non-stick skillet, melt the butter and olive oil over medium heat.  Place the beet mixture into the pan and press down with a spatula.  Let cook a few minutes, then break up, flip over the pieces and press back together to brown other side.  Do this a few times until the veggies are starting to get browned.  When browned, remove from pan, sprinkle liberally with sea salt, and keep warm in the oven.  Wipe out the chunks from the pan, and either spray with non-stick spray or add a little more olive oil.  Place back on heat, and when hot, add eggs.  Cover pan, and reduce heat to medium low until eggs reach desired doneness (or you could do over-easy and flip them to cook the other side, in which case don't reduce the heat or cover with the pan).  When eggs are done cooking, remove from pan, and sprinkle with sea salt and pepper and keep warm.  Place pan back on the heat, return heat to medium, and add a little more olive oil to the pan, along with garlic and mustard greens.  Saute greens until they are just wilted, sprinkle with sea salt and pepper and remove from heat.  To plate, place a half the hash browns on each plate.  Top each with an egg and half of the mustard greens.  Enjoy!

Happy When Not Hungry said...

Wow this looks delicious! I love the combination of flavors and the beautiful colors too!

sumptuous dish! The beet hashbrown is new to me and the recipe is bookmarked :)

What a meal!!Love all the color contrast..looks really really tasty!!!

Whoa! Those hashbrowns look AMAZING! I making these asap!
The colors certainly are gorgeous!

Wipe out the chunks in the pan, and possibly spray with non-stick spray or include just a little extra olive oil.
I have played the online games especially the wow for a long time and I have some good suggestions for everyone to get the bestSell WOW Gold via more easy and safe ways, I also have the best advice for you of the WOW Gold Cheap, please don't hesitate !