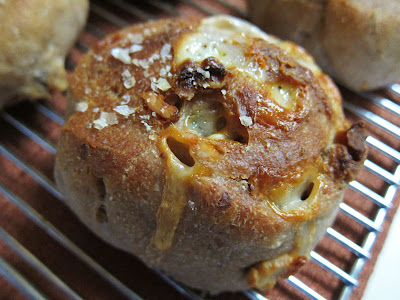 Roquefort cheese and toasted almonds are a heavenly combination...one that I often use in salads, but this weekend I used it in a little different way, in a bread!  I wanted to make special rolls for Mother's Day to go with the meal.  There is nothing like fresh baked bread to accompany a meal for a special occasion, and rolls containing melty savory cheese and crunchy toasty nuts are even better! 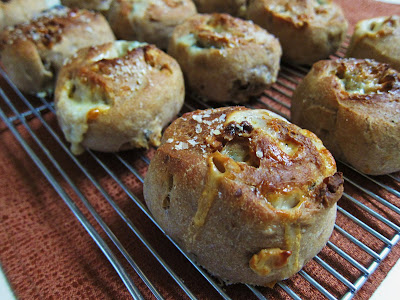 I used my whole wheat baguette dough for the base, because I wanted the outside to be crispy and hearty.  It made for delicious rolls with the add ins!  They smelled wonderful while baking, and of course tasted even better than they smelled.  The rolls were soft on the inside, filled with sweet and salty creamy roquefort and toasty crunchy walnuts, and crispy on the outside as well as a little salty due to the sea salt. 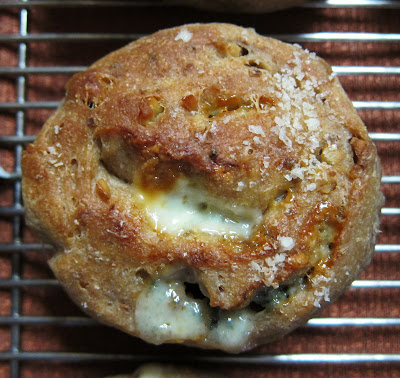 They needed no accompaniment...butter would have been inappropriate, they were so good as they were!  Mom approved saying they were the best savory rolls I had ever made!  They were perfect for Mother's Day along with a fritatta and salad I had made!  Here is the recipe if you would like to try some of the deliciousness for yourself! 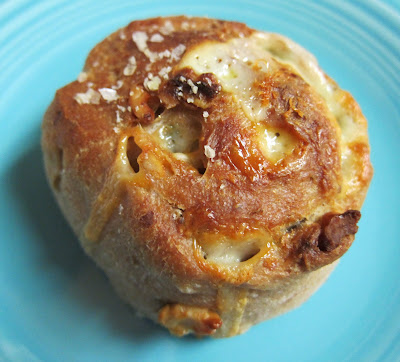 
Combine flours and  sea salt in a large bowl.  Make a well in the center and add all the water but 1/2 cup.  Add yeast and stir in just enough of the flour a little at a time to make a sponge (a wet dough mass, but there will still be plenty of flour around it), then cover with plastic wrap and let sit until the sponge starts to get bubbles, about 20 minutes.   Stir in the rest of the flour and enough additional water to make a soft but not sticky dough.  Turn out onto a board and knead until the dough is smooth and elastic (about 8-10 minutes).  Knead in walnuts, then shape into a ball and place in a well oiled bowl.  Cover with plastic wrap and set in a warm area to rise.  When doubled in bulk, punch down, and let rise again.  When doubled in bulk again, punch down, and place on a lightly floured surface.  Stretch dough out into about a 15x18 inch rectangle, and scatter roquefort over it.  Roll up the long side, and cut into 16 rolls.  Place cut side up on a foil lined baking sheet, and cover with plastic wrap.  Place in a warm area to rise, and turn on the oven to 400 degrees, with the rack set at the center position.  When the rolls have almost doubled in bulk, brush them with olive oil, and sprinkle with coarse sea salt.  Bake for 20-25 minutes, until lightly browned and done in the center.  Cool on a rack until warm and serve! 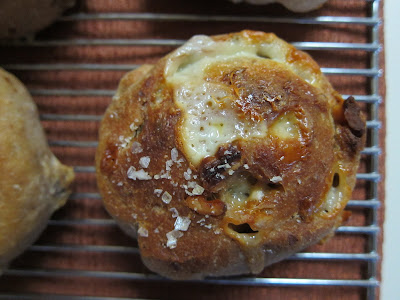 These look just delicious! Love the combo of the cheese and walnuts. I've got to give these a go!

Amy these look fantastic!! I've definitely saved this recipe, it's a keeper :)

What a delicious and unique roll! Sounds amazing!

Wow Amy, those look simply amazing! I love Walnuts and then put them in a roll? Looks so yummy!

I can just imagine their taste. Fantastic! My favourite flavours rolled together.

I can only imagine how these cheesy, ooey, gooey, soft fluffy rolls must have smelled baking and tasted! YUM!

Of course I want to try some of this deliciousness. Cheese and walnuts in a roll is heavenly. Wonderful add-on to the meal.

Thanks for the recipe Amy.
We really really enjoyed it and I see myself making these rolls many times in the future.
Hope you're having a wonderful Sunday

These are just fantastic...such a great recipe and love the walnut and cheese combo :)

Roxana sent me your way...and oh am I happy she did. Lovely, tasty recipe share and your blog is awesome! Give me a jingle if you'd like to meet-up (by email) for an interview on my site ;)

Wow! That sounds fantastic. I have try these!