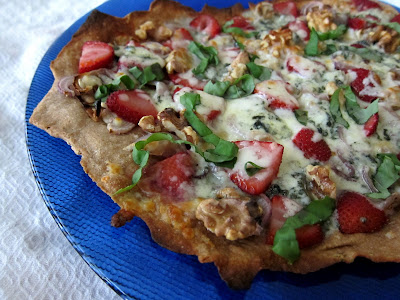 One of my favorite things to make at home is pizza.  Ever since I recieved a pizza stone for Christmas about 5 years ago, I have been experimenting with pizzas and their toppings. Pizza stones give you that amazingly crisp crust that you get from restaurants. I am from the school of cracker thin crusts that serve to showcase the toppings...with no sauce and lots of veg and sparing amounts of cheese.  Most Americans would not consider my pizza to be a pizza...I guess you could say it is in it's own class.  I guess where I got the idea to make my pizzas as they are is from a restaurant that is now closed, but which used to have fabulous upscale food in Minneapolis, Auriga.  They used to serve pizzas with grapes combined with roasted peppers and pecorino romano and interesting toppings like that.  So I thought I would create my own combinations of ingredients and see how they turned out on a pizza.  This also became a way for me to sample new cheeses...since I made pizza every week, and tried to change it up every time. I always use a bit of mozzarella though, as a base cheese, because I feel that it serves as a blank canvas that melts the flavor of the other chosen cheese and toppings together.  I have used everything vegetarian imaginable on my pizzas...mangoes, beets, fennel, leeks, squash, every kind of nut and cheese...with some successes and some failure.  The failure mostly coming from discovering which cheeses don't melt, or which veggies emit too much water.  My favorite combination of toppings though has to be the strawberry and carmelized onions with toasted walnuts, roquefort and mozzarella cheeses.  I thought I would share the recipe so you all can enjoy the deliciousness that is this pizza.  Even skeptics that I have served this to have been won over...
Amy's Whole Wheat Pizza Crust
Makes 8 10 inch crusts
Crust:
4 1/2 cups whole wheat flour
1 Tbsp Salt
2 Pkgs rapid-rise yeast
2 cups warm water


To make the dough, in a large bowl, combine the flour and salt. Make a well in the center, pour in the water and then dissolve the yeast in the water. Gradually stir the flour into the water mixture, until the dough comes together. Turn out onto a floured surface, then knead until smooth and elastic, about 5 minutes. Oil a large bowl with olive oil, then place dough in bowl and cover with plastic wrap. Place in a warm area, such as near the oven, and let the dough rise until doubled in bulk. When dough has risen, punch down and divide into 8 pieces. You can either freeze the dough in individual portions (just place in ziplock bags and take out the night before you want to use it, then it will be ready to use the next day), or set aside to use right away.  If making the recipe below, you will need two crusts. 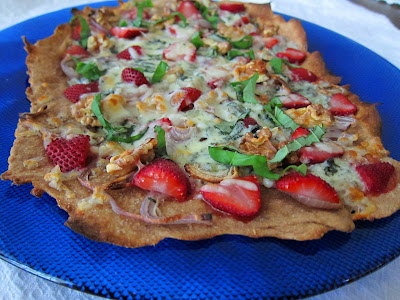 
To make the perfect pizza, you need a good quality pizza stone. Place the stone on the highest rack in the oven, then crank up the heat as high as possible at least an hour before baking the pizza. Heat a medium non-stick skillet over medium heat and add the olive oil and onions.  Saute until very soft and translucent, then add the garlic and cook for about 30 seconds until fragrant.  Add the balsamic vinegar and stir to coat onions.  Remove from heat and set aside.
To assemble pizzas, place one piece of the dough on a piece of parchment paper, spray rolling pin with non-stick spray and roll out as thin as possible (about 10 inches is best)Repeat with other piece of dough using another sheet of parchment. Sprinkle salt and pepper over crust, then scatter over the strawberries, onions, walnuts and then the mozzarella and roquefort. Using a pizza peel, or an upside down sheet pan, carefully slide the dough (keeping it on the parchment) into the oven. Bake for about 3-5 minutes, or until crust is starting to brown and cheese is bubbling. Carefully slide the parchment onto a sheet pan or pizza peel to remove from oven.  Scatter the basil over the pizza and serve! 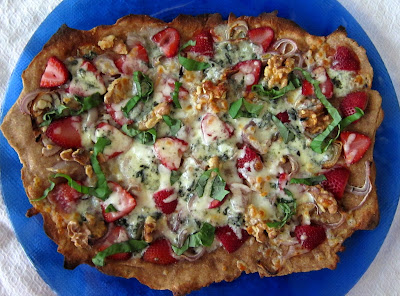 Yummm!! I've made about 4-5 pizza posts recently and I'm always looking for a fresh idea. This is CERTAINLY that! I need a pizza stone though. I never knew it'd make that much of a difference! Caramelized onions make everything better don't you think?

I love the sound of a strawberry pizza with cheese and onions. Hmm, I might have to try this over the weekend, Amy. My Cauldron Boy will be gone, so everything I make will be what i want! Ha ha ha...

Your pizza looks fab. I like a very thin crust myself and I agree that a pizza stone is a must. I love the combination of flavors! Thanks for posting. :-)

Actually I've never think of these flavors together, thanks for the new idea :)