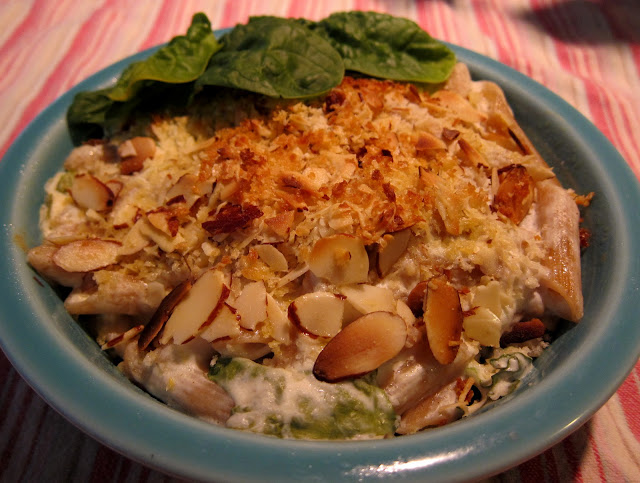 I walked out of work today, and was immediately hit with cold rain...brrr!  I cranked up the heat in my car as I drove home.  It is 45 degrees today, in Minnesota, and rather dreary, which made me decide to make something warming and comforting for dinner, like a casserole.  I like to heat up the oven and the stove when it is cold in the house, and eat something warming! I had a head of garlic on my counter and some lemons, so I thought I would incorporate them into a pasta dish!  Mac and cheese sounded good, but not wanting to mess with a roux and melting cheeses I thought I would use neufchatel to make the dish creamy.  I roasted the garlic in the oven, which mellows it and gives it a wonderful flavor, and pureed it in the blender with the lemon, as well as the neufchatel and some pecorino romano for some saltiness.  I felt that the dish was needing some veg, so I threw in some spinach for color.  I could have left it as was, just simply creamy, but I wanted a contrast to the creamy, so I added an almond breadcrumb topping.  As the dish immerged from the oven, a wonderful aroma filled the air, and not even waiting for it to cool a minute I had to dive in!  The dish was warming, comforting and delicious!  Just what I needed on a cold rainy day like today!  Give it a try the next time the cold rain hits, or when you feel like some delicious pasta!

Preheat oven to 475 degrees. Wrap garlic in foil, and rost until very soft, about 45 minutes to 1 hour. Remove from oven and let cool until managable, then squeeze the cloves out of the papery part and set aside. Lower oven temp to 400 degrees. Bring a large pot of salted water to a boil. Add pasta to salted water and cook according to package directions. Reserve 1/4 cup pasta water and drain pasta. Place pasta in a large bowl with spinach. Place garlic in food processor, along with neufchatel, lemon juice and zest, 3/4 cup pecorino romano and salt and pepper to taste and enough extra pasta water to make a creamy sauce. Pour the sauce over the pasta and spinach and toss to coat. Pour into a medium sized ovenproof casserole dish. In another bowl, mix together the panko, almonds,1/4 cup pecorino romano and olive oil. Spread the breadcrumb mixture over the pasta. Place in the oven and bake about 10-15 minutes, or until hot and breadcrumbs are lightly brown.
Posted by Amy at 5:13 PM

It was cold in the Northeast, too! Where did the warm weather go?!

The breadcrumb mixture sounds amazing. I can almost smell the almonds baking in the oven now!

this is great for a cold night. Real comfort food. Thanks for sharing the recipe :)