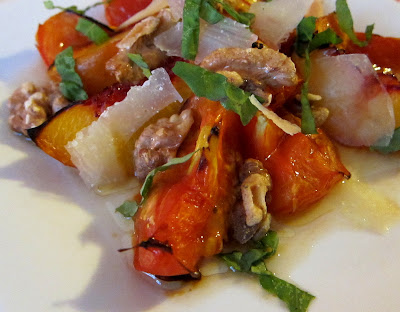 When tomato season hits, I try and use them in every way possible...I love them simply cut up and sprinkled with fleur de sel!  But sometimes I like to be a bit more creative with them, especially in salads!  The other day, my Dad had just given me a whole bunch of fresh tomatoes from his garden, and I had also bought some nice ripe peaches at the store, which got me to thinking, what about combining the two in a salad?  Seems like an unlikely combo, but that is what I liked about the idea!  But they wouldn't just be cut up and thrown in...I decided to roast them both to bring out the sweet flavors of the fruits!  So I drizzled them with a little olive oil and threw them in the oven!  Meanwhile, I decided that they would be nice accompanied by some toasted walnuts, Pecorino Romano, and fresh basil...not a likely combo at all for a salad, but it actually turned out quite wonderfully!  Especially after the roasted goodness was drizzled with sweet and tangy reisling vinegar, and olive oil and dusted with freshly ground pepper and fleur de sel!  Try out this scrumptious summer salad if you are looking for something a bit out of the ordinary! 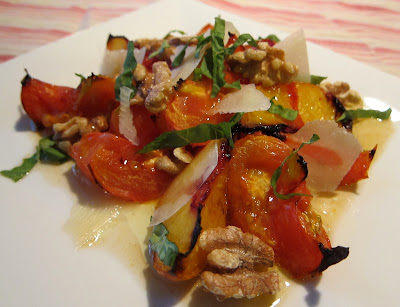 
Preheat oven to 475 degrees.  Line a baking sheet with foil, and spray with non-stick spray.  Spread tomatoes and peaches out on the baking sheet, and drizzle with a little olive oil.  Bake for about 20-25 minutes until soft, and starting to char in places.  Remove from the oven and let cool to room temperature.  Divide tomatoes and peaches evenly between 3 plates, scatter walnuts, pecorino romano, and basil over each, and drizzle each with a bit of olive oil and reisling vinegar.  Sprinkle each salad with a little sea salt and pepper and serve! 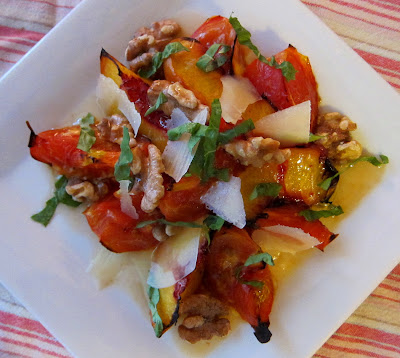 What a great combination! Super intriguing!