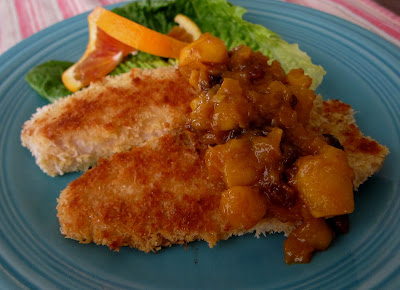 Sometimes you just can't get to the store, and therefore, you are forced to cook with what you happen to have on hand at the time.  This was the case for me yesterday.  I had some tilapia fillets, but I didn't want to cook them in a boring way, so I thought maybe a coconut coating would be good...and since shredded coconut and panko bread crumbs are things that I always have, it could be made without a trip to the store. But I thought a piece of fish on its own might be a little boring on the plate and not so pretty to look at, as well as needing something to compliment it, with a different texture than the crunchy coated fish.  So I looked at my counter and there sat a mango, a shallot, and a few pieces of citrus.  I didn't want to make a salsa, so I thought maybe a compote similar to a chutney might be nice.  I had some golden raisins in my fridge, and some curry powder, so the experiment could begin!  I was skeptical about the combination of he compote with the coconut fish to be honest, and not being a curry expert, it could have been a hit or miss situation, but it ended up being a hit...very good!  This is definately something that I will make again even if I have to buy the ingredients.  Maybe sometimes it is good to be forced to cook using what you have instead of making a trip to the store!


compote:
2 tsp coconut oil
1 shallot, minced
1 tsp sweet curry powder
a pinch of cayenne pepper
1 large mango, diced
1 Tbsp lemon juice
juice of 2 medium oranges
1 Tbsp honey
2 Tbsp golden raisins
sea salt to taste
fish:
1 cup finely shredded unsweetened coconut
1 cup panko bread crumbs
2 tilapia filets
sea salt
freshly ground black pepper
flour
1 egg, beaten
1 Tbsp milk
1 Tbsp butter
1 Tbsp coconut oil
To begin, make the compote. Heat coconut oil in a medium sauce pan over medium heat, then add shallots and saute until translucent. Add curry powder and cayenne and saute for about 30 seconds, then add the mango, lemon juice, orange juice, honey and raisins. Cook on medium heat until the mangoes start to soften, then lower to a simmer on low heat while you prepare the fish.
Turn the oven on to 250 degrees. In a large shallow bowl, place the flour. In another large shallow bowl, whisk together egg and milk. In another large shallow bowl, combine coconut and panko. Season the fish with sea salt and pepper. Line the 3 bowls up and dredge the fish in the flour, then dip in the egg to coat, then place the fish in the panko mixture and make sure you coat the fish evenly, pressing the crumbs and coconut onto the fish to adhere. Set aside fish aside on a plate while you heat the pan. In a large non-stick skillet, heat 1 Tbsp oil, and 1 Tbsp butter. Place the fish in the pan, and cook until golden on the first side, and beginning to cook through about 4-5 minutes. Flip the fish over, and cook on the other side until golden, and cooked all the way through (the fish should flake easily, and be opaque all the way through). Remove the fish to a plate in the oven to keep warm. When the compote has simmered for about 20 minutes, taste for seasoning, and add sea salt to taste. Place the fish fillets on a plate, then spoon the compote over the top of the fish and serve!
Posted by Amy at 3:10 PM

Saw your profile on another page. Glad I read your informative and well-written blog. Look forward to following you here. Have a wondeful night. Cheers! Coconut, Mango and curry what a great flavor profile.