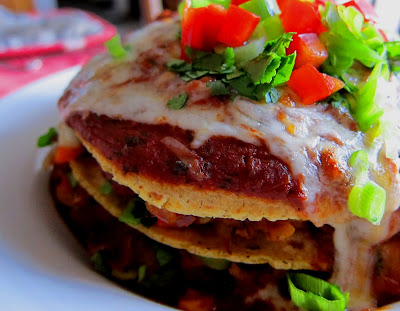 Buttercup squash is a vegetable I can't get enough of! In fact I love it so much I cook extra and freeze it just so I can have some in the spring and summer months when it is out of season; It is not really in season anymore, since it is almost April, but I bought a whole bunch and stored it in my basement while it was, so I still have plenty to enjoy. Although I just could eat it plain, roasted and be happy, one of my favorite ways to enjoy it is in enchiladas! Many people make chicken enchiladas, but I use chicken style seitan in mine since I don't eat chicken...and it is just as delicious! This is a recipe I came up with about 2 months ago while the snow was still flying, but I enjoy it so much I have been making it once a week since then. I thought I would share it even though squash is no longer in season, since you could substitute summer squash such as zucchini for the winter squash and just dice it up and roast it for less time. Either way, I love these enchiladas, and if you are a squash lover, you will too!
Roasted Squash Stacked Enchiladas
Serves 2 very generously

6 six inch corn tortillas
1 1/2 cups shredded cheddar or monterrey jack cheese
sour cream for serving (optional)
Preheat oven to 475 degrees. Line a baking sheet with foil, and spray with non-stick spray. Place squash cut side down on the baking sheet. Roast for about 20-30 minutes until squash is tender but not squishy. Let cool and cut into cubes, set aside and lower the oven temp to 375. To make sauce, heat 2 tsp peanut oil over medium heat in a medium saucepan. Add onion, and saute until soft, then add the chili powder, cumin seeds, cinnamon, chipotle, and garlic, and saute about a minute until fragrant, then add the tomatoes, salt, vinegar, honey, cocoa powder and bring to a boil. lower to a simmer and cook for about 20 minutes on low heat and add the cilantro. Using an immersion blender, puree the sauce until smooth, and keep warm. Meanwhile, heat 1 Tbsp peanut oil in a large non-stick skillet over medium heat and add the onions and scallions, saute until softened and add the bell peppers, garlic, seitan and squash cubes. Saute until heated through, then spoon about 1/2-3/4 cups of the sauce over to coat the mixture. Remove from heat. To assemble the enchiladas, spoon a bit of sauce onto 2 large shallow bowls, then top each with a tortilla. Spoon half the filling onto the tortillas, dividing evenly between the two bowls, then spoon a little more sauce over each, along with a third of the cheese dividing evenly between the two. Top each with a tortilla, then the rest of the filling, a little more sauce and half the remaining cheese. Top with another tortilla, the rest of the sauce, and the rest of the cheese. Place in the oven and bake until heated through and cheese is bubbly, about 15-20 minutes. Let cool slightly and serve with sour cream!
Posted by Amy at 5:36 PM

Wow that looks amazing! Beautiful photograph as well. I will have to try that sometime.