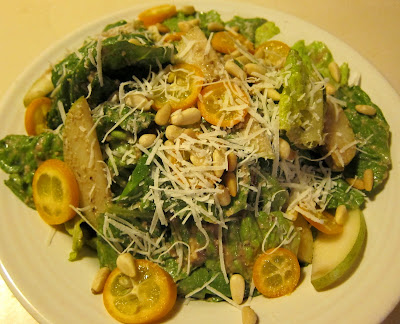 In the winter there are three ingredients that end up in my salads quite often...pecorino romano cheese, toasted pine nuts, and pears.  I love the saltiness of the pecorino romano, and I know a lot of people would consider this completely obsurd, since supposedly Parmigiano Reggiano is the king of cheeses, but I actually like pecorino better (and it is a lot cheaper)!  I tend to favor cheeses made from milks other than cows as well, because they seem to be more flavorful (pecorino happens to come from a sheep).  As far as the pine nuts go, they are like gold in a nut form...very expensive, but totally worth a splurge and definately deserve to be sprinkled atop many dishes!  They have a wonderfully buttery flavor that you don't get with any other nut, and have a particular affinity for lemon, and citrusy flavors.  As far as the pears go, Anjou is my favorite, but Bartlett often finds its way into many of my recipes as well.  Lucky for fruit lovers that we have pears in season thorough the winter months to get us through the peach and other summer fruit withdrawal!  To combine these 3 ingredients I came up with a pecorino pine nut and parmesan salad, and threw in some kumquats for color, since they go well with the three.  This salad is a cure for if you are feeling sick of all the heavy winter food, and looking for something light and refreshing!