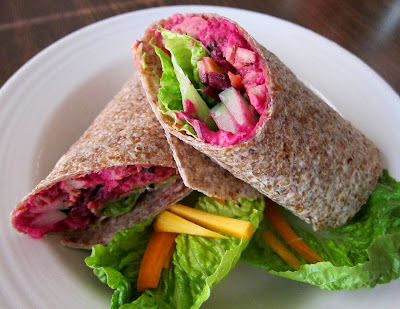 Today I was feeling like eating something that came from a spa...strange, because since the weather is cool still I would usually want something heavy and cheesy, but no, today it was fresh and healthy.  But healthy has to equal flavorful as well as satisfying, at least in my kitchen!  So I was thinking of ways I could incorporate hummus into my dinner for tonight, since I had made a batch yesterday (spring beet and white bean hummus (see previous post for recipe)).  Wraps using whole grain tortillas sounded like a good idea to me, since I could use the hummus as a flavorful spread and incorporate some fresh veggies as well, and still have it be a filling meal.  I needed a protein source, and I felt like going vegan for today, so I sauteed some chicken style seitan with some garlic and shallots and added it to the filling to make the wrap even more substantial.  The wraps turned out wonderfully, and took no time at all to prepare...plus they made me feel like I was at a spa!  Here's the recipe:

Heat the olive oil in a non-stick pan over medium heat and add shallot.  Saute until softened and add seitan and garlic.  Saute until heated through, then add salt and pepper to taste as well as oregano and lemon juice.  Stir in and remove from heat.  To assemble wraps, spread hummus on each wrap on the upper half of the wrap, dividing evenly among the four. Place a romaine leaf on each.  Spoon seitan mixture onto each wrap in a line on the upper third of the wrap.  Divide carrots, cucumber and sprouts evenly among the wraps placing the veggies atop the seitan.  Roll up the wraps tight, secure with toothpicks, and cut in half on the diagonal if desired.  Makes 4
Posted by Amy at 5:05 PM