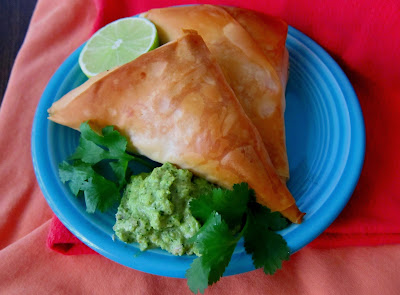 Last night I made had roasted some sweet potatoes as a side dish.  They are so wonderful on their own, but even more so when you roast them at high heat until the skin is almost charred, then scoop out the soft flesh and puree it with a bit of lime juice and sea salt...that simple, but sooo good!  Amazingly, last night I had extra, since they were rather large potatoes to begin with.  Not being the type that likes to waste food, I let my imagination wander as to what sort of new and interesting dish I could possibly make them into.  Well, I had some extra filo dough in the freezer, and some goat cheese in the fridge as well as some limes on the counter...so I thought, what if I mixed together the cheese, lime and sweets, and encased them in the filo dough as a sort of snack or appetizer...would it work?  Would it taste good?  There was only one way to find out.  I decided that to make them even more tasty I could make a sort of a pesto to go along with them.  I decided the pesto would contain cashews, coconut and cilantro among other things, and I could whip it up while the triangles were baking!  I was very pleased with the result of this new food creation!  The triangles were fabulous!   The pesto to go along with them turned out delicious as well, but if you are in a time crunch you could just do the triangles...they are very addictive, and I bet you can't eat just one.  They are even good at room temperature and could be used as an appetizer at a party.  If you do end up making the pesto, you can use extra as a dip or spread.

Preheat oven to 375 degrees. Line a large baking sheet with foil, and spray with non-stick spray.
Mix together cheese, sweet potato puree, lime juice and zest, egg, chipotle, and garlic in a medium sized bowl until well combined.
Place one sheet phyllo on work surface, and use a pastry brush to coat one half of it with butter. Fold in half lengthwise, and brush top with more butter. Fold in half again to make 4-inch strip of dough. Brush strip with butter, then spoon about 2 Tbs. sweet potato mixture on corner of bottom edge. Fold corner across to make a small triangle, then fold up like a flag, enclosing sweet potato in triangle of phyllo. Brush both sides of phyllo triangle with butter, then place on prepared baking sheet. Repeat process with remaining phyllo sheets, butter, and sweet potato mixture. Bake about 20-22 minutes, or until triangles are golden. Transfer to wire rack, and cool at least 10 minutes before serving. While the Triangles are baking, combine all pesto ingredients in a food processor, and process until smooth. Serve with the Triangles. Makes 12 triangles
Posted by Amy at 5:20 PM

A long time ago I had sweet potatoes with goat cheese at a restaurant and they were divine! Your recipe sounds just as wonderful and looks great. Thanks for sharing :o)

what a great combo.
I make triangles using yufka pastry instead of phyllo